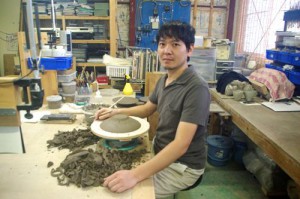 -Please tell me what made you start pottery.
When I was a high school student in Osaka, my friend asked me to join pottery club, which was on the verge of breaking up with the shortage of club members. Actually, it was not my own accord but I thought that pottery suits me.

-Please tell me what made you to be a professional potter.
I felt that I wanted to continue pottery when I was in high school and had to decide the course after graduate. So I entered the Nara College of Arts, Course of the Pottery Art. During my work at the college, I became to think how much I myself could do as a professional. So after graduated this junior college, I also took a special course in pottery for more two years. Rather than “job” it’s instead “professional”, I thought at that time.

-Why did you choose to learn pottery in Mashiko after graduated the college?
Before graduating from the special course, I was thinking that I should work on pottery company or became a someone’s disciple, and my college teacher introduced me a potter, Seiichi Imanari in Mashiko. Mr. Imanari used to work in Bizen (where is known as Bizen ware) mainly Yakishime pottery and I was really interested in Yakishime at that time. It required courage to decide to become a disciple. I received advice from people around me and decided to come to Mashiko. (Tashiro-san learned pottery from Mr. Seiichi Imanari for six years.)

-And why did you think to make your own pottery studio in Mashiko?
When I started live in Mashiko, I was thinking about going back to Kansai after I learn for two years. And I begun to think to have my own studio after 4-5 years passed but couldn’t decide the place, I should go back to Kansai or stayed in Mashiko. Meanwhile, a farmer introduced me a vacant house with work place in Mashiko. House was abandoned actually but the work place was really good to be a potter studio, I thought. So I decided to have my own studio there on impulse. And I’m still in this place now. 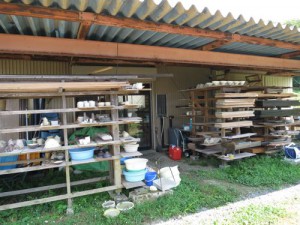 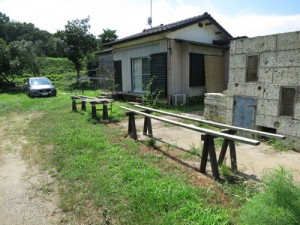 Lay out dishes on this rack to dry in the sun 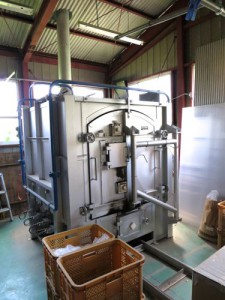 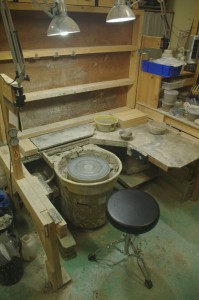 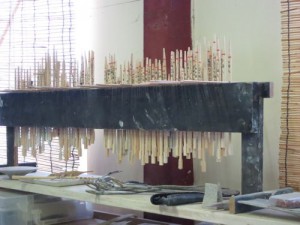 His studio is just next to his house. He repaired the ceiling, wall and kiln place by himself.
He also designed and made worktables for his wife and himself (his wife is also a potter, name as Hiroko Suzuki) with Rokuro machine! Amazing!

The greatest feature of his work is using a hand potter’s wheel, not electric at the finishing.
He said, “This is the way from Imanari sensei. It takes time however, it remains ununiformed and the warmth of soil.” 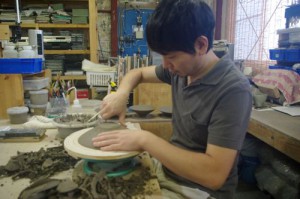 -Are you working with no-mindedness while you are making? And do you listen any music while working?
I really want to concentrate when I’m using a wheel but I can talk when I’m work finishing.
I wanted to have a nice audio in my studio and I did. I like to hear something smooth music during my work. I like Jazz, Hiromi Uehara, Keiko Lee, etc. or I listen to the radio. 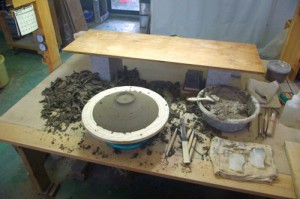 -Now, I’d like to hear about your work again, are you thinking something you’d like to try for the next?
Yes, I have a lot of things that I want to try but it also difficult to make as I imaged. I never know until I make it. I fire once in a month in my studio. Therefore I won’t know a result one month ahead if I want to try something new. Then I modified and test again, and will see the result another one month later. So the testing is very important but I need to focus, which I should test.

-Do you take notes?
I take notes roughly when I thought something really important or idea comes up.
But I definitely take notes every time I tested, recipe of the solid, mud and glaze.

–Do you cook and use your dishes? And do you ever fix your works by them?
I sometimes cook. And I change the specifications, accordingly. The touching or the smoothness will be different with the glaze or firing. Beside the tools are deeply related to the finishing, especially for Yakishime. After bake pottery in kiln, I sometimes polish it with sandpaper.

-Your pottery has a thin and simple shape, could you tell me how could you reach to this kind of shape?
I have liked that simple shape since a long time ago. I think that thin shape is also come from my peculiar habit when I using a wheel. I have tested so many times. Sometimes I could make as I just imaged but failed more than double. On the other hand, I became to think that I should develop an eye, which can notice a different good point even if it was not what I imaged. Those experiences and accidental by-products are extremely useful for making my pottery’s form now.
I have been explored and acquired my styles. And I will continue to explore to make simple but expressive pottery as long as I do this job.